Moving the IT system

Wiesbaden-based acb GmbH has restructured its IT infrastructure in a forward-looking manner and found the right partner in SYCOR GmbH . With outsourcing to Sycor's data center, the financial services provider experiences the benefits of outsourcing firsthand: state-of-the-art IT know-how and high standards for data security and system availability.

The service spectrum of acb GmbH covers the areas of accounting, controlling, risk management and reporting for fund initiators and investors who invest in national and international real estate portfolios. acb has developed an innovative, software-based accounting model, which, at its core, is substantially different from conventional structures and provides solutions for all typical challenges. acb has grown steadily since its foundation in 2009, and today has around 90 employees at the locations of Wiesbaden, Munich and Luxembourg.

Good collaboration from the start

acb GmbH moved into a new location in Wiesbaden. Reason enough to also put the IT infrastructure to the test. The continuous increase in administrative and technical costs, not to mention the increasing market demands, made it necessary to align the existing IT infrastructure towards the future so as to render it flexible and high-performing. Existing technology also needed to be brought to the cutting edge. „We would have pushed up against our limits in the foreseeable future,“ says Thomas Schofer,IT director at acb GmbH. This is why, he explains, the company chose to outsource its IT and realize the project with SYCOR GmbH. What nailed the cooperation deal was the excellent industry know-how and the wide range of services of the IT service provider. „Since the start of our company, we have been working closely with Sycor, and have always received competent advice on all IT matters,“ adds Mr. Schofer.

Full Outsourcing from a Single Provider

Sycor planned, controlled and implemented the entire outsourcing project. The existing infrastructure was moved from the old server room in Wiesbaden and centralized at the Sycor data center. „We have consolidated the IT environment of acb, and standardized the servers. The servers were virtualized and provided centrally via the Sycor infrastructure. It is redundancy-based, so that disaster recovery functions can be implemented easily, tested in a realistic environment, and modified if necessary,“ explains Thomas Potzern, Sycor project manager. „In addition, we have assisted acb with structural issues revolving around IT infrastructure - such as server rooms, local network, fire protection, etc.,“ according to Mr. Potzern. As part of the project, a new Citrix environment was also set up, and the Enterprise Content Management system was upgraded to the most recent version. The day after going live, Sycor also provided one-site support for the after-care phase.

By operating through the Sycor data center, acb can rest assured that all requirements with respect to data security are met. This includes, for example, data backups in two, physically separate data centers. Since customers of acb were to be able to access the systems without any problems even during the project, it was crucial that the systems‘ performance not be impaired and that the high security parameters and availability be maintained. All systems were moved in a single weekend - from migration to going live. „By using state-of-the-art IT technology, we were able to boost our performance and the systems‘ energy efficiency at the same time, and prepare the infrastructure for future growth. The Sycor staff have been super helpful throughout the project, and at all times, they approached our requests in a flexible and constructive manner and, thus, made sure it was going to be a win-win,“ Mr. Schofer says in conclusion.

for topics concerning IT infrastructure. 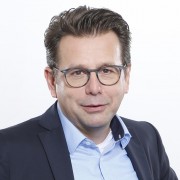